Let the Beauty of What You Love Be What You Do!

Ever notice how easy it is to orient your life by Fear?
I have. I’ve even been struggling with that Dragon a bit of late. Not surprising I suppose, given that I grew up suckling on Fear as if it were mother’s milk.
Yep, Fear and I, we go way back; back to Dad’s whipping me to beat the sin out of me; back to Mom slapping me in the face as a child to make me into a good little preacher’s son; back to God promising to throw me into hell if I didn’t stop masturbating; back to me needing to feel special as a defense against the terrors of a hostile world masquerading as a God of Love…
Gets so a guy can become right afraid to even breathe, as if he doesn’t deserve the life force that animates him. Gets so a person starts to orient their life by what other folks think of him… whether he wears the right clothes or has the right thoughts or hangs with the right people or believes the right beliefs….
Pretty soon it get so as a guy can’t even trust his own sense of distinction between Fear and Love cause he’s so busy constructing a world of good and of evil, of right and wrong, of black and white, of them and us, the saved and the sinners, the terrorists and… God’s chosen. Yep. The personal stories vary only by degree (the value of an ‘extreme’ is not to be underestimated) but the themes remain the same: Fear and Love, insufficiency and sufficiency, good enough and never good enough, power-over and power-within, war and peace….
Opps! But as long as we’re here—
Ever notice how war feeds off Fear? Or do you think it more accurate to say, “War feeds Fear?” “Fear feeds war?” I can’t rightly say but I do know I’ve been a man at war with himself of late, standing at one of Life’s crossroads and fearing a mistake if….
That Fear can paralyze you like you were Bambie in its headlights if you let it.
Yep. Don’t matter if it’s driving the latest model of Predator or Parasite… Don’t matter if it’s called Al Quieda or Satan or “You won’t be able to pay the rent!” or “Your friends are going to hate you!” or “Give up your rights to save your life!” or “She won’t love me anymore if she see who I really am!”
Yep. There are a thousand ways to kneel and feed the Beast.
Sort of reminds me of a Rumi poem, translator unknown: 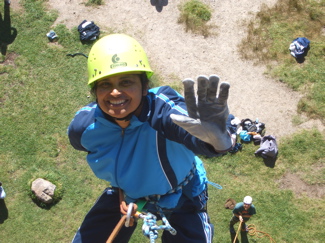 Then there’s the Rumi lines:

Let yourself be silently drawn
by the stronger pull
of what you truly love.

OK, now I admit I’m thinking of an earlier post on this blog and what I think of as Life’s Two Fiery Questions:

There are only two questions:
“What shall I feed myself, today:
Fear? or Love?”

And the second question is this:
“What shall I make of myself,
As a sacrifice of flesh and spirit,
Upon which the world will feed?”

Guess I better start upping my intake (and output) of Love! How else is a man to find the trust to orient his life by some innate sense of… how Life would have him move? How else will I (or your?) find the courage to even trust Life?

How else will any of us find Peace?

Everything is Connected to the Whole!