The 10 Most Amazing Space Photos in the Universe 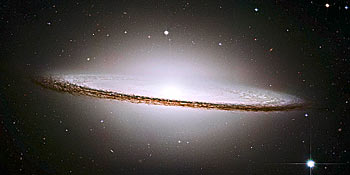 taken by the Hubble telescope. The dimensions of the galaxy, officially called M104, are as spectacular as its appearance. It has 800 billion suns and is 50,000 light years across.”

“The story of the universe is the story of the emergence of a galactic system in which each each new level of expression emerges through the urgency of self-transcendence…. The human emerges not only as an earthling, but also as a worlding. We bear the universe in our beings as the universe bears us in its being. The two have a total presence to each other and to that deeper mystery out of which both the universe and ourselves have emerged.” — Thomas Berry
To let the senses of wonder, beauty and amazement fill you, check out the site associated with the photo. It is rated #one of ten Hubble space photographs. The voting could not have been easy.
And this is the world we live in!
Address: You; Me; Us; Them; Earth; Milky Way; Home!
Who? What is the Self anyway?
Note: To continue and to deepen this preceptional tour of wonder, check out A Matter of Perspective Part II

The Healing of the World Depends on this Courage

The Cross We Are Hung Upon