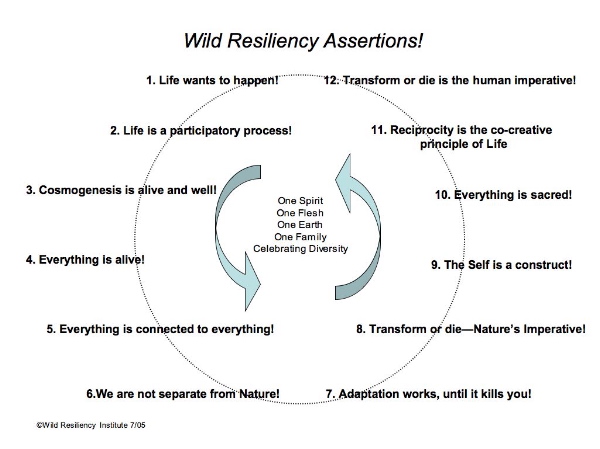 These WR Assertions comprise the conscious foundational Ground of Being assumptions that have evolved and informed me in the development of the WR model. As such they color the vision of everything that can be perceived through the lens of the model; and they determine the shadow of the model as well, what it is unable to reveal and what I am unable to see through it. This is of course true of all Ground of Being assumptions, whether they be of a Christian or Islamic or Buddhist or Atheist… or a business model lens. Such assumptions normally remain unconscious to us; here I have tried to bring them into awareness and to even claim them as assertions and percepts.
Our ability to identify, reflect and dialog on our own foundational assumptions is critical as we discover our path into the future. These are the world-view ‘beliefs’ and attitudes that inform and direct, at the level of percept-ability, the world we live within, inclusive of: our national terrorism policies, whether we attend a church, temple, mosque or forest glade for worship, the structure of our educational and health care systems, and the capacity to shapeshift the ‘negative’ events of our days and lives into beauty. Our present struggle to hold in mutual respect the diversity of our foundational assumptions is reflective of the fragmentation, fragility and descent into decay our social systems are now in.
Such a decay is inevitable and necessary in order that we may dream a new world into being. The only question becomes, “What kind of world am I dreaming into being?” If you desire to know the answer to this question, discover and make explicit your Ground of Being assumptions.
For example, if you consider that for much of Christendom the physical world of flesh is contaminated with sin, original — or inevitable, that the end of this same world is prayed for in the belief that there is a ‘better place waiting for me…,’ then the degradation of the earth’s sustaining ecosystems suddenly not only makes sense but seems an inevitable outcome of the belief system. (Models of Christian environmentalism and stewardship are emerging however.)
If we perceive the world through a materialistic world view alone, as another example, without in some way honoring that which is unseen and beyond knowing or naming…, we ourselves also easily become but objects to be manipulated in such a universe. Coincidentally, this becoming an ‘object self’ also occurs if we choose a God who treats us as such, souls to be sorted and judged and discarded or kept based upon some dogma of Truth and loyalty. Sort of reminds me of a kid sorting his marbles.
Closing with a Joseph Campbell quote here seems appropriate:

“In choosing your god you choose your way of looking at the universe.

There are plenty of Gods.

I suppose this could be said of presidents as well.
Some informative links reflective of the above include:
Christians United for Israel: a video and transcript illustrative of a certain fundamentalist Christian world-view (with powerful political ties in Washington) in which a unilateral military attack on Iran is called for so that the rapture may the sooner come.
What Went Wrong: Bush Still Doesn’t Get It: An excellent article in the Washington Post reflecting on how a simplistic and fatally flawed misunderstanding of Islam has led us into a disastrous war against terrorism.
Religious Tolerance: interview audio and transcript excerpts on the Interfaith Youth Corp, a group promoting “religious pluralism” vs. religious totalitarianism, through empowering youth to work together in service of others. The Good Radio Shows site, where the Religious Tolerance link originates, is also a good source for Marshall Rosenberg and Nonviolent Communications and more.
“Spiral Dynamics is concerned with why we cooperate, collaborate and come to conflict over differences in values and the deeper value systems that form them. It’s a map to the emerging nature of human nature. SD is a point of view and a way of thinking that provides a way to chart differences in leadership, learning, management, social structures, economics—and virtually every other area where human thinking has an impact. Moreover, it suggests how to cope with those differences more effectively.”
Note: this post and page will initially appear as both. I will post reflections on each of the assertions and add them to the page version accordingly. Additional links will be added and updated on the page version also. If you like the thinking you see here, I invite you to subscribe for feeds or email updates. We won’t sell or use your information for other purposes.
be well, stay wild, and choose carefully.

One Wound—Two Stories and the Oval Office

A Walkabout into Collective Consciousness