I learned in school that life on earth was a Darwinian accident, and that hence… I (my life) was an accident; and further more, if you want a life—you better get to fighting for it cause it’s a world of the survival of the fittest out there.
I learned in church on the other hand, that life on earth was a creation of Jehovah God in Heaven but one he repented over, at least the part where he made man. “I am sorry I have made them.”
Turns out that making man “in his own image” led to the creation of a creature so evil of heart that God decided to destroy the entire living world, save Noah and his family and the boat full of seven (or two, depending on the verse you read) of every kind of creatures he could pack into the Ark (Genesis 6 & 7). God then had second thoughts again after he witnessed the destruction he wrought upon the world with his flood and gave Mankind the rainbow as a promise to never again repeat such an angry outburst with a flood. (He later promises, according to my tradition, to do it instead by fire….)
So as a kid I got to choose between the foundational beliefs of either 1) being a Darwinian accident or 2) being “made in the image of God” but in need of salvation because I was a flawed creature: meaning that even though we didn’t believe in the theological doctrine of original sin as did the Catholics, we had inevitable sin because we were… human, i.e. “wretches.” And then there was option number 3: being thrown into madness as I tried to live out the resulting fragmentation of body, mind and spirit the waring dogmas of schizophrenia left me in.
I’d frankly have been dead many times over if there were not some… life force deep within me that wants to happen, that seeks expression. The fact is that direct suicide is so damn hard to pull off (though if you happen to be in that place it is staying alive that feels the harder) that folks who get trapped between worlds as I did…, many of us just end up living lives of inadequate adequacy rather than embraced lives of fulfillment; we settle for lives of self-medicated deception through behaviorally proving our worth to the world or through being mesmerized by our hunger for the novelty of a new toy or through… take your pick. I prefer red wine these days myself. 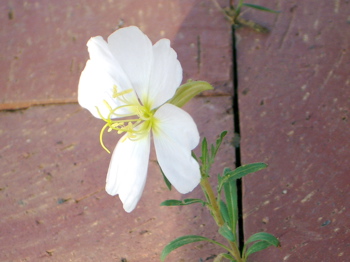 The life force that sends the first green shoot of a wild iris leaf up through a blanket of snow in the early days of spring… that is the deep life force that lives in me and you and in mankind right now is this time of our crisis; it is a time when numbing ourselves with the distractor of our choosing will rule our lives—if we do not re-member the deep life force within… that gives rise to our every breath.
That life force splits the cement sidewalk in front of your house… it is the life force of a ponderosa pine sapling that reaches for soil and water and so cracks open a granite boulder… that is the same potent life force that lives within us and now seeks our bearing witness to. This tree happens to live in the upper watershed of the Pecos River in New Mexico not far from my home, and with its hunger for life it split and so helps life to digest this boulder. Local old timers bear witness to this tree’s purposeful living with their memory of a sapling on top of a boulder. (photo coming)
Science now allows us to witness the abundance of what biologists call “extremeophiles.” These are life forms, often bacteria, that ‘love the extremes’ of hot or cold or the ‘noxious’ or the pressurized combinations thereof. They can be found proliferating in the deep ocean thermal vents, at the earth’s poles, buried in ice fields and high in our stratosphere; and such living organisms are now acknowledged to be a bio-geologic force on the planet, slowly eating away at the rock walls of the earth’s intestinal caverns where no human could even reach without the aid of imported life support.

Notice however, that the word extreme, referring to ‘the edges’ of life, as we know it, is a species-centric view. We only call them extremeophiles because they live and thrive and reproduce where we cannot. Surely, to the estimated 10,000 species going extinct annually (one every 9 to 44 minutes) as a result of human caused/exacerbated global climate destabilization and environmental degradation… it is we humans who are the extremeophiles.
In this time of Earth’s transformation, in this turning of the tides from the Cenozoic era into what Thomas Berry calls the Ecozoic era, it is time to remember, touch and open to this capacity for biotrophism that lives innately within us, beyond the depths of cultural and personal story. It is this capacity for turning toward life, it is the surrender to the deeper life force within that seeks to emerge, that carries the caterpillar through the life stage of the cocoon into that of the butterfly….
Turn toward that. Nurture your children in nature so they can learn what biologist Edward O. Wilson calls biophilia, the love of life; what herbalist Stephen Harrod Buhner calls biognosis, the knowledge of life.
The causes for the despair of life are legion… to not turn ones eyes from what is… is life’s first lesson of survival.
If there is a second life lesson of survival for humanity at this time, it is this: learn to track the breath of life within, and with the sacredness of our dreams and imagination, desires and thinking… to act and think in such a way as to initiate the birthing of the world that with a deep love of life may yet arise out of the ashes and dieing of so much and so many. Re-member: Life wants to happen!
Resources on my mind in the writing of this:
How to Save the World blog post: What We Care About. This is a classically excellent post for David Pollard at a blog I’ve just discovered and wish I had years earlier. Among the jewels in this post are a quote by the late Stephen J. Gould:

We cannot win this battle to save species and environments without forging an emotional bond between ourselves and nature as well — for we will not fight to save what we do not love.

and this from Mr. Pollard himself:

“We don’t care enough. And that’s perfectly understandable. How can we love what we do not see, feel, smell, hear, taste, know?”

Organizational Consultant Margaret Wheatly makes this point that Life Wants to Happen in far fewer words in her article, The Unplanned Organization: Learning from Nature’s Emergent Creativity. She further says,

“For me, this means that I belong to a whole planetary community of life, and that I am supported in my own small efforts by a deep natural history spanning between four and five billion years — life wants to happen as a community and we are all part of it.”

The Lost Language of Plants: The Ecological Importance of Plant Medicines to Life On Earth by Stephen Harrod Buhler.
The Great Work: Our Way Into the Future by Thomas Berry.
The Creation, An Appeal to Save Life on Earth by biologist E.O. Wilson
Deep Survival: Who Lives, Who Dies, and Why by Laurence Gonzales. He also has an article in the August ’07 issue of National Geographic’s Adventure magazine: How to Survive (Almost) Anything.
The Online News Hour of PBS ran a story on July 16, 2007, featuring photographs from “the book ‘The Deep: The Extraordinary Creatures of the Abyss,’ by wildlife journalist Claire Nouvian.” Bioluminescent creatures are featured who live at depths of up to 2500 meters; “scientists estimate that tens of millions of species remain to be found,” according to biologist and deep-sea explorer Edith Widder who studies and photographs these creatures and is also featured on the program. The program makes the point that life at these extremes of cold and pressure are particularly partucularly fragile due to slow growth… and are endangered due to modern bottom trolling techniques: “We do not know how resilient these life forms are…” nor how their disturbance may cascade up the system to ultimately effect us….”
Note: this post will soon appear as a subpage under WR Foundational Assertions and will be updated there.