Resiliency Dancing: Play for Your Life!

“I don’t know how to play,” the man said to me. The statement carried a certain intimacy simply because the man speaking is one of my brothers. 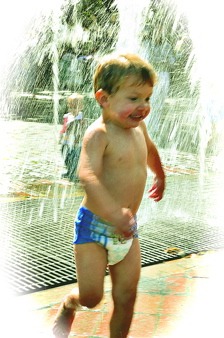 Mythologist Joseph Campbell’s admonition to, “Follow your bliss,” would have been heard as a promotion of hedonism in our fundamentalist childhood home. Yep, there was a reason God kicked Adam and Eve out of the Garden, and the deep underlying message we took out of that literal reading of the Bible is that—the desires and curiosities of the flesh and mind are not to be trusted. Play, pleasure and fun… can simply be inclinations of your own (God given) body that the devil might use at any unsuspecting moment to tempt you into an eternal life of ‘hell fire and brimstone.’
It was a dangerous world we grew up in, a world of cosmic spiritual warfare where seriousness was appropriate and laughter… well, it escaped occasionally, but life was anchored in the somberness of our vulnerable human circumstance. Enter Dr. Stuart Brown, physician and psychiatrist, and founder of the National Institute for Play. “…he discovered play deprivation across the lifespan of homicidal young men. And he observed an active play life as a quality of healthy individuals.”
“A playful life,” he writes, “contributes directly to the capacity to approach and solve complex life problems.” He also speaks of “guilt free purposelessness,” and of the ‘science of play,’ and of the ‘natural history of play.’ The later is particularly appropriate since he “found little serious science on human play. But he discovered a rich world of study in the work of Jane Goodall and other biologists engaged with intelligent social animals.” I encountered his work through a link to American Public Media, and an interview with Krista Tippett on the Speaking of Faith series: Play, Spirit and Character.
You can watch an incredible encounter there between a polar bear in the Canadian 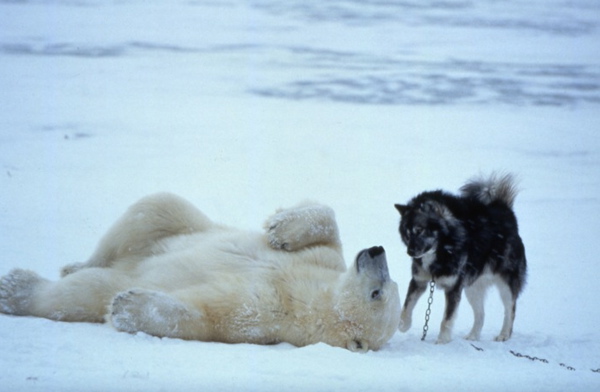 Arctic and a Husky sled dog, as well as listen to or download an audio or a transcript of the interview; highly recommended. One point of the bear/dog encounter for me is this, and it has also to do with what I will call presence:
When we show up to life in a spirit of play, in a spirit of creative spontaneous openness, our own soul encounters the ‘soul of the world’ in a dance of cosmic emergence where —— previously undreamed of possibilities open before us.

…when you see animals and humans who are deprived of it [play], they are fixed and rigid in their responses to complex stimuli. They don’t have a repertoire of choices that are as broad as their intelligence should allow them to have. And they don’t seek out novelty and newness, which is part of an essential aspect of play, both in animals and humans. So if you look at the human situation, at least for the last 200,000 years or so, our capacity as a species is to adapt, whether we’re in the Arctic or the tropics, the desert or a rain forest, appears to me to be related significantly to our capacity and, as developing creatures, to play.
And then if you look more closely at the human being, you find that the human being really is designed biologically to play throughout the life cycle. And that, and from my standpoint as a clinician, when one really doesn’t play at all or very little in adulthood, there are consequences: rigidities, depression, lack of adaptability, no irony – you know, things that are pretty important, that enable us to cope in a world of many demands.

I don’t know about you but in the world I live in, the pressures and demands and turmoil and fears…well, they’d simply take over my life if I let them; they are some of the parasites and predators of our era. Maybe that’s why one of the ways I think of freedom is “the capacity to place my attention where I choose.” And in our world, such a freedom is no small achievement.
Neither is the capacity and ability and willingness to play, particularly if you’ve been raised to not trust the impulse. It is the re-membering of such forbidden innate impulses that I consider to be an aspect of wild resiliency at its finest, a returning to the wholeness of our own deep nature. And each of my brothers and sister are teachers to me in this realm; they each have learned to dance with resiliency in their own way, to live life by their own rules.

You look at the successful lives of people who have really made a difference in human society, and what you find is that they didn’t do things by the rules. They, in fact, insisted on making their own rules. They were playful people…
No one becomes a great inventor or a great scientist or a great writer or anything else, unless they love what they do. Because you have to really be able to invest your entire soul into something. And if you can’t play at it, if you can’t just do something because you enjoy it, then you can’t do it completely enough or long enough to succeed at it.

So go play as if your life depends upon it; go play for your life! Go outside and play. It is one of the ways your can dance with your resiliency, nourish it, feed it, be it.
Note: this post is the first of an ongoing series with this theme of Resiliency Dancing. I look at resiliency as more of a field phenomen that we stand in relationship to, than as a muscle we develop, or even as something we ourselves possess.
Also, as resource notes in regard to resiliency and play, I highly recommend the following:
Mihaly Csikszentmihalyi, Flow: The Psychology of Optimal Experience
Stephen Nachmanovitch, Free Play: Improvisation in Life and Art
Diane Ackerman, Deep Play

Loneliness & Presence: What the Aspen Know