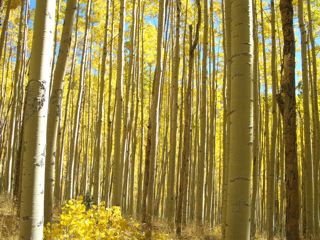 the first version of which appeared on this blog as a post (see below for link). I’ve been looking however to take a larger look at the writing I’ve done on aspens, including on SAD (Sudden Aspen Decline), and this gathering of links is an initial step in that direction. My hope is that it might also help any who find their way here through the Sun’s publication, to discover more of the aspen’s medicine.
See a post to come shortly for an update on related off-site aspen links (SAD, ecology…).

Loneliness & Presence: What the Aspen Know, August 22, 2007
The Aspen Have Been Working Me Over, August 9, 2007
Forbidden Knowledge and the Aspen-Body, October 20, 2007
Aspen-Body Wisdom: Learning Journey Quotes, October 25, 2007
A Celebration of the Self: Wild Resiliency!, October 29, 2007
Learning From Nature’s Emergent Creativity: Margaret Wheatley and the Aspen Trees, October 31, 2007
Self-Love: A Radical Political Act, November 3, 2007
Intelligence in Nature: Chimps vs. Humans, December 8, 2007
Change Hardiness & Learning Agility: What the Aspen Know, January 6, 2008
S.A.D? Sudden Aspen Decline!, March 26, 2008
The Power of McCain’s Religious Worldviews, May 8, 2007
Interwoven Spiraling Dimensiions of Consciousness, July 22, 2008
Restoring the West 2008 — Aspen Restoration, August 4, 2008
To Think a Tree Might…Save Us From Ourselves? September 23, 2008
Bits of Wisdom From a Tree! September 17, 2008
What is the Most Important Question You Can Ask? October 25, 2008
A Walkabout into Collective Consciousness, October 27, 2008
Collective Consciousness, Wisdom and Intelligence Resource Links, October 27, 2008

Thriving Through the Turbulence

The Aspen Have Been Working me Over