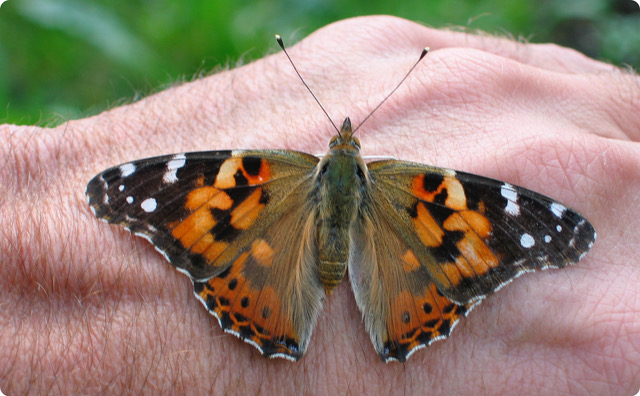 Getting Naked to Self and the World

Allowing one’s self a wander into the wild is to invite a slowing down into your life. Even as the mind opens with curiosity as to patterns previously unnoticed, a stillness descends.
The feet find their way along first one game trail and then another, going nowhere but where ever they feel led in the moment. So it was I found myself walking into the middle of a near dozen mule deer on an exquisite June evening in the Sangre de Cristos, as the southern terminus of the Rocky Mountains in Colorado and New Mexico are called.
The evening still carried the heat of a near Solstice day though we were on a shaded east facing slope in an area of mixed pine and aspens. The air carried musky scents of deer now too, as well as that of summer soil and heated tree needles and leaves.
I cannot say who was the more surprised to discover this human amidst the lanky four legged ones. They were women all, so far as I could see; mostly adults but with a few yearlings among them.
Despite our mutual surprise there was no startle reaction. They stared a bit before returning to grazing, though a couple thought to slowly begin a kind of high step sneak-away walk; just in case. I left my gaze in a soft focus while continuing a rhythm of observing, walking a bit, stopping and observing more, intentional steps and breaths.
Finding myself in their presence, their beauty and grace enlivened the experiences of awe and humility and of belonging within me. I eventually walked out of their company, and a few of them out of mine, with the same I-am-forest consciousness I first entered among them with.
It was from the presence of this experience still vibrating within that an hour or so later I sat down and shot this video, curious to see what might reveal itself to me. My reflections do not actually start until about 49 seconds in. I recommend giving yourself the gift of slowing down enough to let the stillness of the forest in as you wait. That means taking a few intentional breaths.
And if this presents too much tension in your system, notice it, take a breath… and then click ahead to that time in the video. A transcription follows.