A Celebration of the Self: Wild Resiliency!

The concept of wild resiliency, and consequently of Aspen-Body Wisdom, represent for me the convergence of multiple and diverse professional lives. Two threads woven throughout the tapestry of my heart’s wandering however are the themes of personal, and of organizational or cultural, change and transformation.
Psychologist Abraham Maslow captured one requisite essence for personal change to occur with this assertion:

What is necessary to change a person is to change his awareness of himself.

Here is a similar quote from A Simpler Way, by organizational consultants Margaret Wheatley and Myron Kellner-Rogers.

Systems create themselves and pursue paths of their own making. If we want to work with a system to influence its direction – a normal desire as we work with human organizations – the place for us to work is deep in the dynamics of the system where identity is taking form. … If we want to change what has come into form, we need to explore the self that has created what we see. … A self changes when it changes its consciousness about itself. … It is essential to remember that all change originates when we change our awareness of who we are. (Emphasis added)

It is for this reason, and to capitalize upon the opportunity of our passing through the fall season of Aspen’s glory in my home territory of the Southern Rocky Mountains, that I have been writing and working in this territory I call Aspen-Body Wisdom of late. I have given public multimedia presentations, presented at the Santa Fe Bioneers Satellite Conference, and led multiple forest hikes in order to share the memes captured by the imagery of the Aspen Body.
So when a friend said to me at a party recently, “Larry I don’t get it. What is it with you and the Aspens…?” I had to stop and consider how to better convey the essence of the issue for me. It is this: I am playing with our sense of Self!
I see this as the core issue requiring change if we are to find our way through the challenges we have created for ourselves. I seek to offer an invitation to the world-and to myself-to perceive ourselves from the wholeness of who we are, through the lens of our grandeur and potentiality and wonder and mystery… and our finiteness, and to thus provoke mythic and biological imagery that can point us into a future worth dreaming into being. I believe the Aspen Grove and ramet offer such imagery of the dimensionality and plurality of the self, of the ecological nature of the Self, to help us move beyond requisite adaptations and further into the transformation of human consciousness. 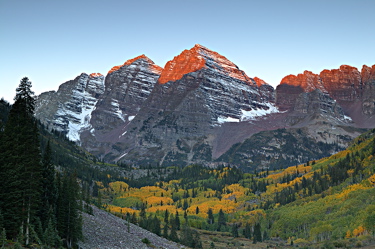 Here I would offer a simple photograph of an Aspen Grove by a dear friend, and a series of quotes that invite us yet deeper into the nature of the Self. [Note the Category Aspen Body Wisdom for additional posts on the subject.]

We abuse the land because we regard it as a commodity belonging to us. When we see land as a community to which we belong, we may begin to use it with love and respect. -Aldo Leopold

For fragmentation is now very widespread, not only throughout society, but also in each individual; and this is leading to a kind of general confusion of the mind, which creates an endless series of problems and interferes with our clarity of perception so seriously as to prevent us from being able to solve most of them… The notion that all these fragments are separately existent is evidently an illusion, and this illusion cannot do other than lead to endless conflict and confusion. – David Bohm

No living thing is unitary in nature; every such thing is a plurality. Even the organism which appears to us as an individual exists as a collection of independent entities. -Goethe

To live consciously within this sacred world is for the personal self of the individual to be integral with the Great Self of the universe. To move from this abiding spatial context of personal identity to a sense of identity with an emergent universe is a transition that has, even how, not been accomplished in any comprehensive manner by any of the world’s spiritual traditions. -Thomas Berry, The Great Work

“Sooner or later,” she continued, “each of us leans that there are only two great tasks that confront us in each lifetime. There are many missions and life goals, of course, but all of them can be combined into two primary objectives.” … “As we pass through life,” the kahuna said, “each of us creates the reality in which we live.” … “And each of us is responsible for creating the self that lives in that reality.” – Hank Wesselman, Medicinemaker

The ubiquitous human ego is actually not an “I” at all; it’s merely an “it.” Seeing through this illusion reveals an endless Cosmic Joke, where the human tragedy itself is part of the comedy. The irony of human experience is in how fiercely the ego fights to preserve the illusion of a separate, individual “I”-even though this is not only a metaphysical impossibility but the wellspring of all suffering. -David R. Hawkins, Power vs. Force

As physical resources become less available, psychic energy must support the human project in a special manner. This situation brings us to a new reliance on powers within the universe and also to experience of the deeper self. The universe must be experienced as the Great Self. Each is fulfilled in the other: the Great Self is fulfilled in the individual self, the individual self is fulfilled in the Great Self. Alienation is overcome as soon as we experience this surge of energy from the source that has brought the universe through the centuries. New fields of energy become available to support the human venture. These new energies find expression and support in celebration. For in the end the universe can only be explained in terms of celebration. It is all an exuberant expression of existence itself. -Thomas Berry, The Great Work

Our Wild Resiliency, in its essence, is this celebration of Life, of the Self and of the self.